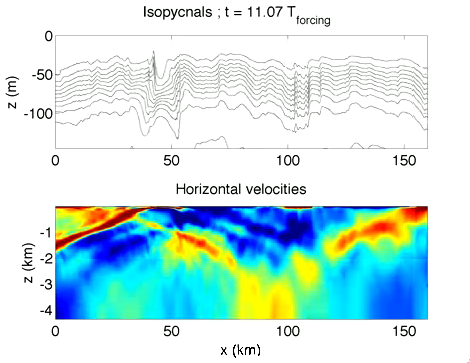 This month we look at work by Nicolas Grisouard and Chantal Staquet of the Laboratoire des Ecoulements Geophysiques et Industriels, Grenoble, France who have been using MITgcm to try to understand how  internal solitary waves (ISWs)  detected in the Bay of Biscay, might occur and what could control their characteristics.

Oceanic observations in the Bay of Biscay as well as in locations in the Indian Ocean, have provided evidence for the generation of internal solitary waves due to an internal tidal beam impinging on the thermocline from below – a process referred to as “local generation”. In a recent paper, Grisouard and Staquet use MITgcm to carry out two-dimensional numerical simulations with a fully nonlinear nonhydrostatic model of situations relevant for the Bay of Biscay in summer. The pair  show that when a beam impinges on an initially resting  thermocline, a displacement of the isopycnals of sufficient magnitude to kick off internal solitary waves can be induced. While at first Grisouard and Staquet found the ISWs they were producing exhibited differing amplitude and inter-wave train distance than those seen in Bay of Biscay data, appropriate addition of background flow in the forcing corrected for this revealing a more accurate view of the local generation mechanism. 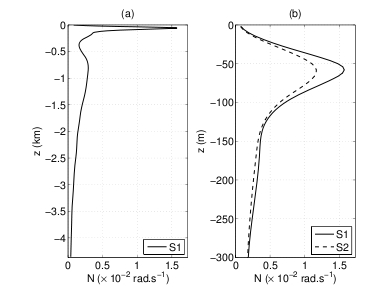 The domain used is 200km wide by 4370m deep with a  horizontal grid spacing of 50m and a depth-varying vertical grid-spacing  of  4m in the upper 170 m, 25m beneath. ISWs in the Bay of Biscay are observed to have a horizontal width of 1000m and an amplitude of 80m. Domain dimensions is 4000x1x234 with an implied width of 200m. An Internal Tidal Beam (ITB) is generated on the western boundary of the domain with a vertical wavelength of 1500m, representative of the Bay of Biscay. The zonal, meridional and vertical velocities and the temperature at the western boundary are then found through polarisation relations (for the details, refer to Grisouard and Staquet, 2010). A 50 km thick sponge layer following the Herbaut formulation (described in Zhang and Marotzke (1999))  is applied on the eastern boundary. The background viscosity and thermal diffusivity are 10−4 m2/s and 10−5 m2/s respectively.  KPP, acting on the vertical viscosity and diffusivity, is enabled (Large et al., 1994), inducing very high values of the vertical viscosity, up to 0.1 m2/s where the beam impinges on the thermocline. In the horizontal, biharmonic viscosity and diffusivity are both 103 m4/s.

Grisouard and Staquet’s  results are demonstrated with the aid of 4 movies. In each movie, the lower panel shows the horizontal velocity through the entire water column while the upper panel shows the density stratification within the thermocline alone.

In this experiment, a realistic IWB hits the thermocline from below. While the parameters controlling the character of the IWB and the structure of the thermocline were chosen based on oceanic measurements at a time of observed ISW generation, none are generated in this simulation.

In this experiment ISWs are generated (observe the very sharp, shape-evolving wavy features  beyond  ~70 km of the western boundary) but to produce them the temperature difference across the thermocline had to be significantly lowered from the summer stratification conditions prescribed in Expt. 1 to conditions more closely characteristic of the spring (maximum N changes from .016 to 0.012 rad/s), a season when ISWs are not typically observed. All other parameters are in common with Expt. 1.

In this experiment, a low-amplitude internal wave confined to the upper ~100m was introduced to represent an internal tide of the kind seen in the Bay of Biscay. With the jump in density across the thermocline back at the summer value prescribed in Expt. 1, ISWs are again observed in response to the IWB hitting the base of the thermocline. In addition, the ISWs now propagate with the same speed as in the Bay of Biscay.

Work to validate against experiment and apply these ideas to simulations integrating more realistic effects such as a background shear flow or a background internal wave field is ongoing. In the future the team hope to be able to validate their results against in-situ measurements. Want to find out more? Contact Nicolas 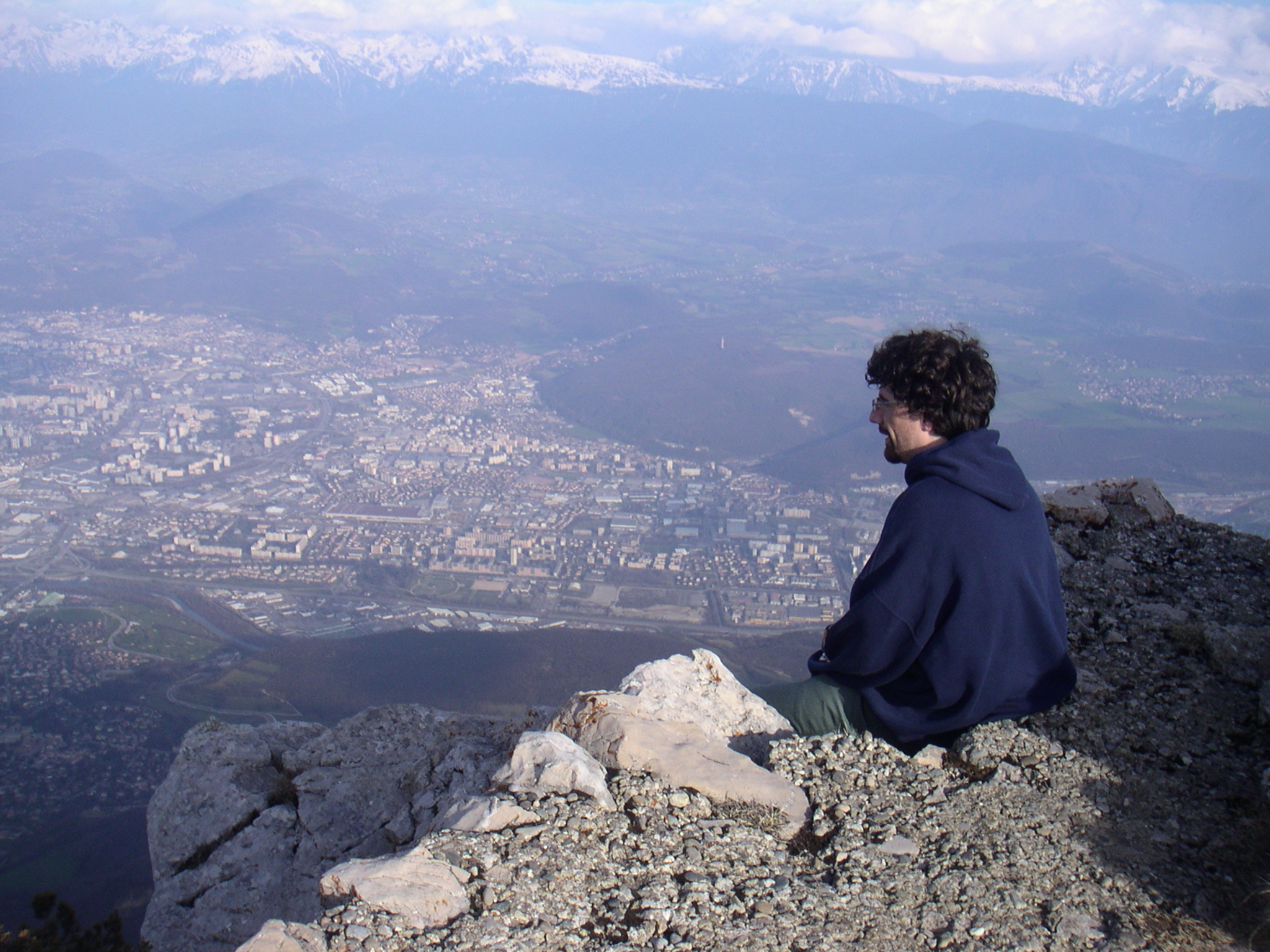 Nicolas has been using MITgcm since 2007. When he isn't modeling ISWs he enjoys hiking (which he says is quite easy around Grenoble, as you can see in this picture of him high above the city). Having just defended his thesis he is very much looking forward to taking up a postdoc position in NYC beginning in January '11.