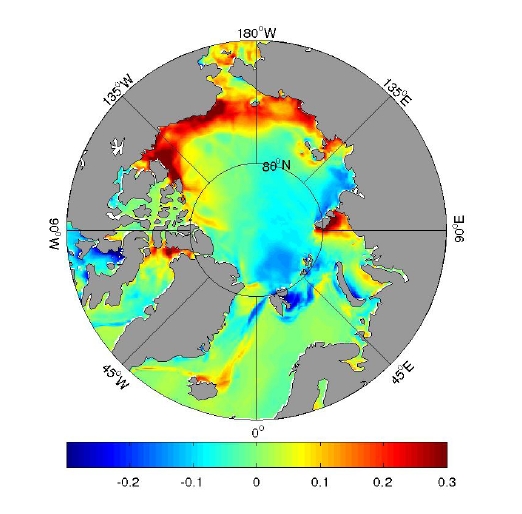 This month we focus on work by Manfredi Manizza (currently working as a postdoc at Scripps Institution of Oceanography, in La Jolla, CA) who together with former MIT colleagues Mick Follows, Stephanie Dutkiewicz, and Chris Hill as well as Dimitris Menemenlis (JPL) and Robert Key (Princeton) has been exploring the Arctic CO2 sink. Motivated by observations indicating rapidly falling annual sea-ice minima, the team use an Arctic configuration of MITgcm to explore the Arctic Ocean Carbon Cycle. 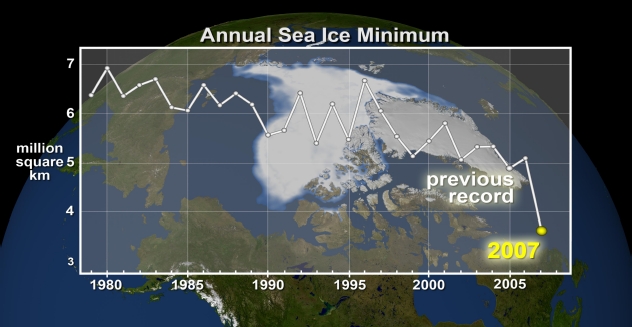 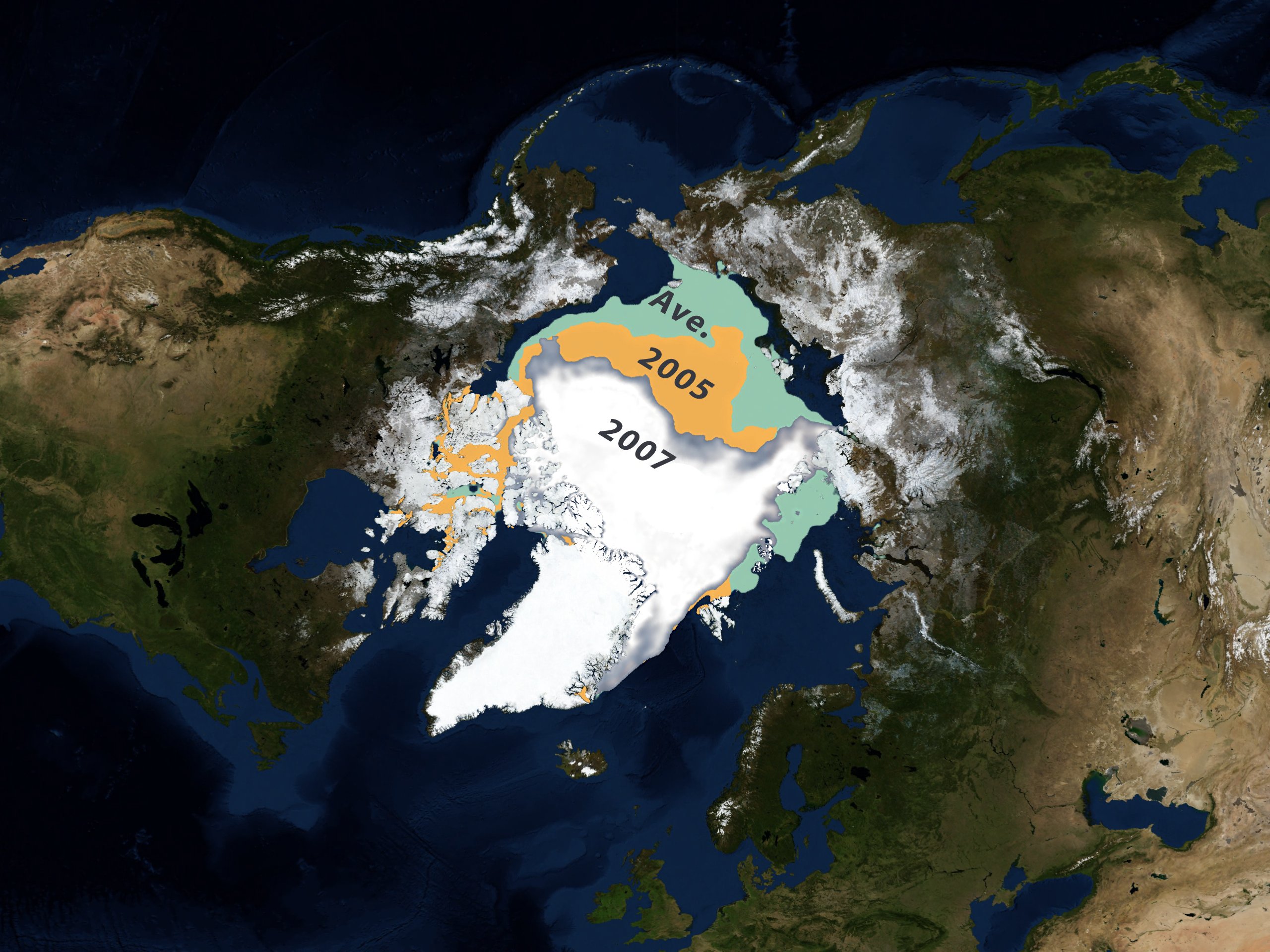 The oceans form Earth’s largest CO2 sink with the Arctic (the region beyond 65o N) contributing to an estimated ten percent of the overall pool. The presence of overlying sea-ice, tends to support under-saturation of the sea-water with respect to CO2 (fig 1c, from Bates et al., 2006). 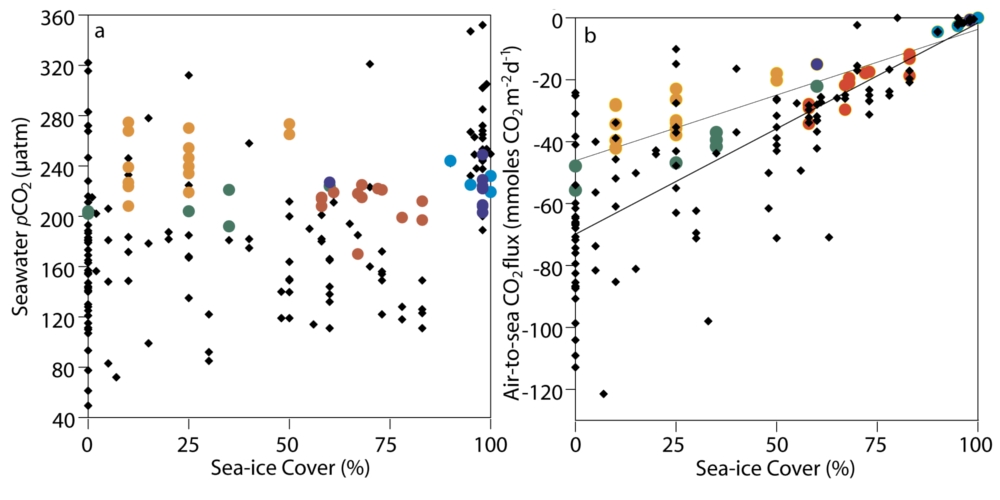 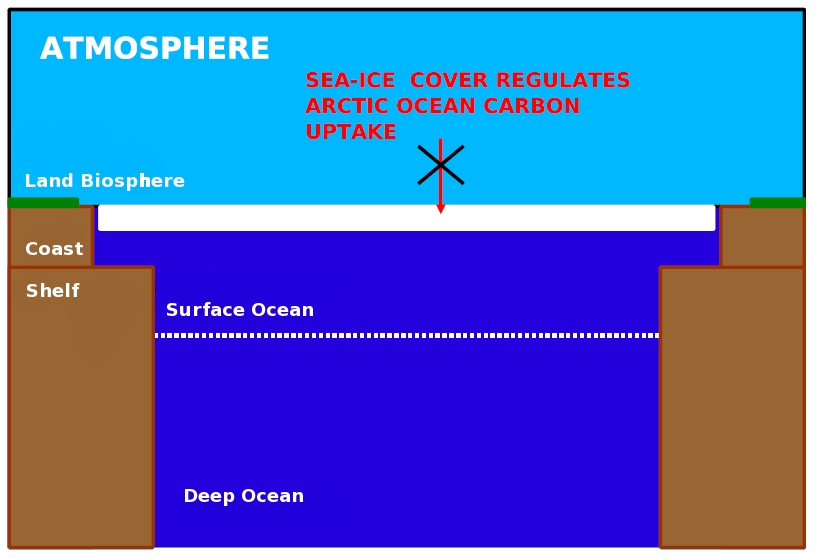 In winter, sea-ice is at its most extensive, capping the surface and preventing atmospheric CO2 from dissolving in seawater. pCO2 values are suppressed and the air-to-sea CO2 flux reduced. Values of pCO2 under sea-ice in winter increase because respiration makes DIC as a result of the low light conditions of the Arctic winter which switches off production and with it the biological draw down of CO2.

In summertime the sea-ice recedes until, around the beginning of September, a minimum is reached. Absence of ice allows free exchange of CO2 from the atmosphere to the ocean and vice versa through thermal outgassing – the so called “solubility pump”. In addition CO2 is drawn into the ocean through a competing “biological pump” in which surface dwelling phytoplankton absorb CO2 through photosynthesis. While a portion of the CO2 is released by respiration the remaining carbon is released by decomposition with net export and sequestration of carbon to the deep ocean. 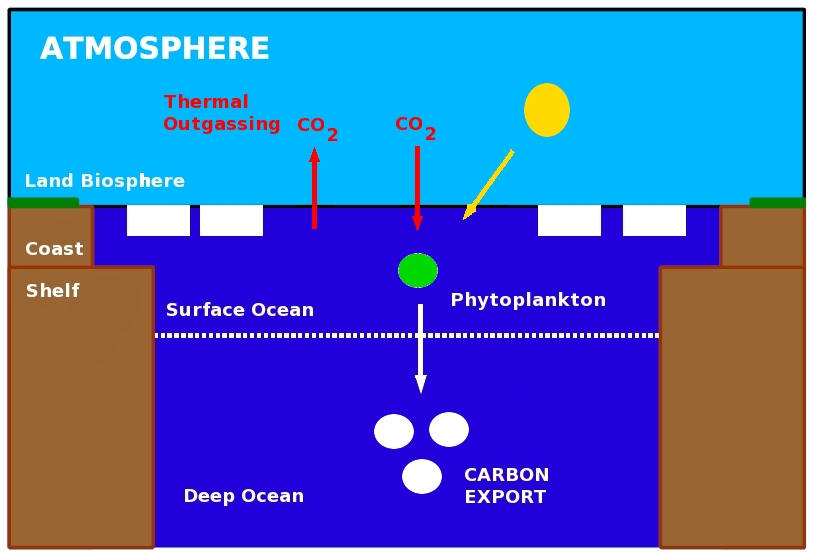 The OGCM is configured on a `cubed-sphere’ grid in a limited area Arctic domain with open boundaries at 55o N in the Atlantic and Pacific sectors. Manizza’s runs incorporate MITgcm’s coupled sea-ice model (details in Losch et al., 2010). Boundary conditions for potential temperature, salinity, flow and sea-surface elevation are prescribed from previous global integrations of the same model (Menemenlis et al., 2005). The grid is locally orthogonal and has a variable resolution with an average horizontal grid spacing of ~18km – allowing the model to represent eddies. Such a mesh resolves major Arctic straits, including many of the channels of the Canadian Archipelago. MITgcm has been used in the same configuration to assess the Arctic Ocean freshwater budget in Condron et al., 2009. The model was initialized with observed physical and biogeochemical fields. The atmospheric state (10m surface winds, 2m air temperature, humidity and downward long and short-wave radiation) was taken from the six-hourly NCEP reanalysis (Kalnay et al., 1996). Monthly mean estuarine fluxes of fresh water are based on the Arctic run-off database (Lammers et al., 2001). The Arctic OGCM is coupled to a simplified ocean biogeochemistry model, which explicitly represents transport and cycling of dissolved inorganic carbon (DIC), total alkalinity, phosphate, dissolved organic phosphorus and dissolved oxygen. A particular novelty here is that riverine DOC is represented explicitly: Model details are in Manizza et al., 2009 (Riverine DOC dynamics) and Manizza et al. 2011 (RDOC/OCC Coupling). The model was spun-up from 1992-1995 . Results from the study period 1996-2007 are below. 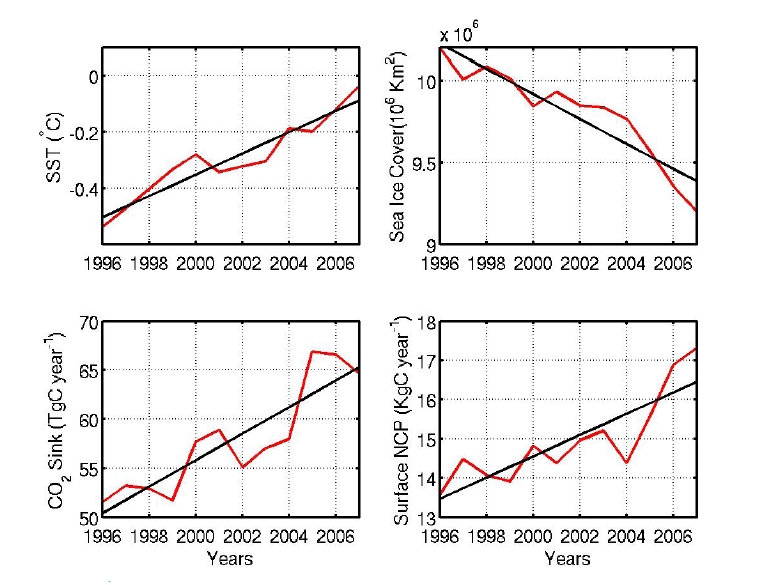 Figure 3a, above, displays time evolution results from Manizza’s model run. Top left we see annual average sea surface temperature rising from ~-0.5 oC to ~-0.1oC over the 10 year period:Top right the associated steep reduction in areal extent of sea-ice from over 10 million km2 in 1998 down to around 9.25 million km2 a decade later. Bottom left shows the amount of CO2 absorbed per year rising from ~ 50 Tg C Year-1 in 1998 to ~65 Tg C Year-1 by 2007. Finally at bottom right Manizza presents the surface Net Community Production (NCP) rising from below 1.4 Kg C year-2 to just about 1.7 Kg C year-2 by the end of the experiment. All quantities are annual averages north of 65oN. 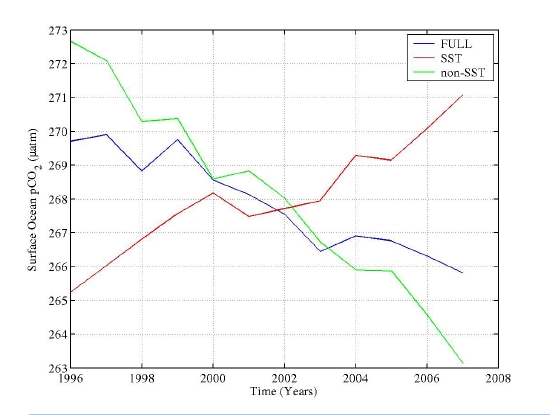 Figure 3b above shows 3 graphs of surface pCO2 as a function of time. Beyond 2002 the biological pump is increasingly dominant.

Figure 5 shows the changes in production and air-sea CO2 flux between 2007 and 2006 from MITgcm (the biogeochemical model). Ranging up to ~0.3 gCm-3year-1, there is a clear signal of increased NCP in the western Arctic, north of the Bering Sea (figure 5a) with corresponding net intake of CO2 in the same region over the same period (figure 5b). 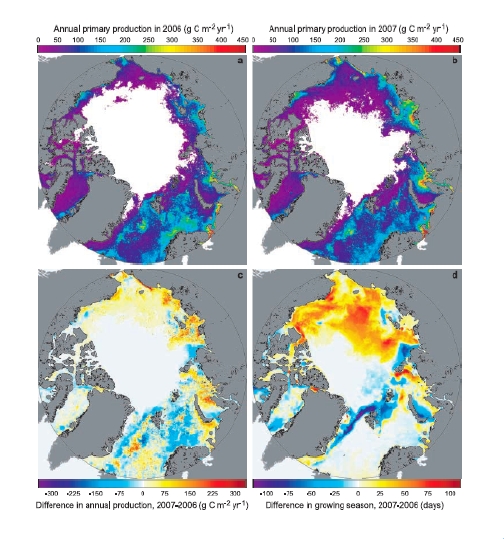 Besides helping quantify the annual estimates for the CO2 sink in the Arctic Ocean (58 TgC year-1), these model-based results highlight its variability, as well as verifying previous data-based estimates (20-100 TgC year-1). In particular these results suggest that events of drastic sea-ice reduction can lead to a significant increase in CO2 uptake in the Western Arctic Ocean. Overall this study suggests that, although its efficiency would be lowered by a weaker solubility pump, future Arctic warming and associated sea-ice reduction is likely to produce a negative carbon-climate feedback in the Arctic region.

To find out more about this work, contact Manfredi. 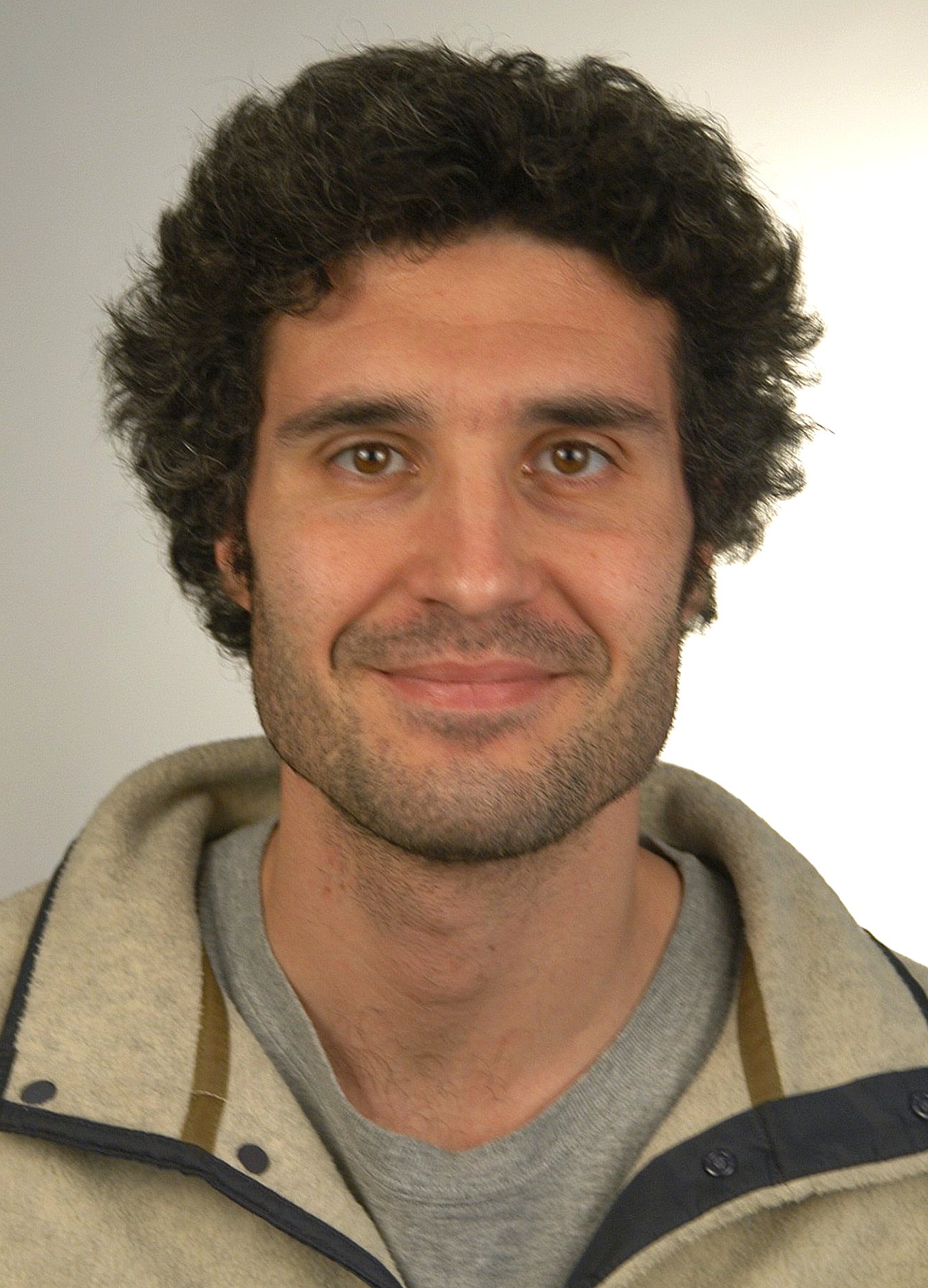 Manfredi has been using MITgcm since 2006. When he is not modeling the Arctic he enjoys spearfishing, surfing and bouldering in front of the ocean in La Jolla.