Baroclinic Instability in the Ocean

Scales, growth rates and spectral fluxes of baroclinic instability in the ocean 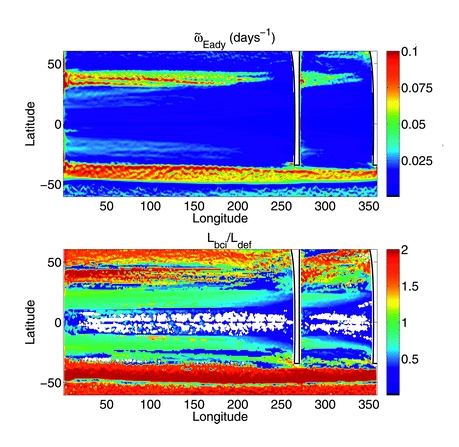 In this work Ross Tulloch (MIT), John Marshall (MIT), Chris Hill (MIT) and Shafer Smith (Courant Institute, NYU) report on an observational, modeling and theoretical study of the scales, growth rates and spectral fluxes of baroclinic instability in the ocean, permitting a discussion of the relation between the instability scale, the first baroclinic deformation scale (R1) and the equilibrated eddy scale.

The geography of the large-scale quasigeostrophic potential vorticity (QGPV) distribution is mapped using a climatological atlas with attention drawn to key asymmetries between eastward and westward currents. A linear stability analysis of the climatology, under the “local approximation”, yields the growth rates and scales of the fastest growing mode.

Fastest growing modes on eastward flowing currents, such as the Gulf Stream and the Antarctic Circumpolar Current, have a scale somewhat larger (by a factor of between 1 and 2) than R1. They are rapidly growing (e-folding in a few days) and deep reaching, and can be characterized by an interaction of interior QGPV gradients, with a steering level at depths coinciding with a zero crossing in the QGPV gradient.

In contrast, fastest growing modes on the broader, gentler westward return flows, have a scale smaller than R1 (by a factor of between 0.5 and 1) and owe their existence to the interaction of a near-surface QGPV gradient and a counter posed gradient beneath. They grow more slowly (e-folding scale of a few weeks) and have a near-surface steering level.

Comparing these predictions from linear theory with observed eddy length scales and spectral fluxes from altimetric data, the team find that the scale of observed eddies is some 2 to 3 times larger than the instability scale, indicative of an expected 2 inverse cascade, but only over a modest range of scales. They find no evidence of an inverse cascade over decades in scale.

Outside of a tropical band, the eddy scale varies with latitude along with, but somewhat less strongly than R1.

Finally, to enable study in a more controlled setting, exactly the same series of calculations is carried out on fields from an idealized global eddy resolving configuration of MITgcm. These experiments lead Tulloch et al. to broadly similar conclusions thus reinforcing inferences made from the data.

To find out more about this work check out their new paper or contact Ross, John, Chris or Shafer directly.