Revealing the role of the North Icelandic Jet 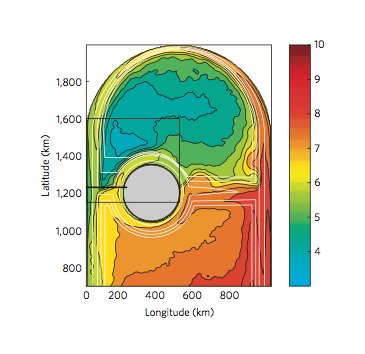 This month we spotlight work by Mike Spall, a Senior Scientist in the Physical Oceanography Group at the Woods Hole Oceanographic Institution, who has been using MITgcm to understand newly observed characteristics of the Denmark Strait Overflow.The Denmark Strait overflow water is the largest dense water plume from the Nordic seas to feed the lower limb of the Atlantic Meridional Overturning Circulation (MOC). Its primary source is commonly thought to be the East Greenland Current. However, the recent discovery of the North Icelandic Jet—a deep-reaching current that flows along the continental slope of Iceland—has called this view into question.  In Significant role of the North Icelandic Jet in the formation of Denmark Strait overflow water, a paper recently published online in Nature Geoscience, Kjetil Vaage, Bob Pickart and Mike Spall, as well as other scientists from Norway and Iceland, present high-resolution measurements of hydrography and velocity north of Iceland, taken during two shipboard surveys in October 2008 and August 2009. The team find that the North Icelandic Jet advects overflow water into the Denmark Strait and constitutes a pathway that is distinct from the East Greenland Current. In addition, they estimate that the jet supplies about half of the total overflow transport, and infer that it is the primary source of the densest overflow water. Simulations using MITgcm suggest that the import of warm, salty water from the North Icelandic Irminger Current and water-mass transformation in the interior Iceland Sea are critical to the formation of the jet leading the authors to surmise that the timescale for the renewal of the deepest water in the meridional overturning cell, and its sensitivity to changes in climate, could be quite different than presently envisaged.

Using the idealized configuration indicated in the accompanying figures and detailed in Spall (2010), Mike constructed a simplified model of the region in question, including only elements key to the general circulation in the region: 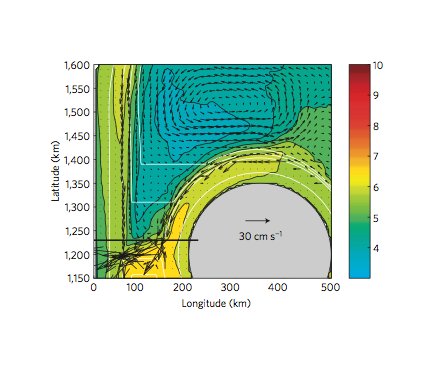 The model domain was 2,000 km in the meridional direction and 1,000 km in the zonal direction with a maximum depth of 2,000 m. A 650-m-deep sill was located at 1,200 km latitude to separate the domain into a southern subpolar gyre and a northern marginal sea (the Nordic seas). An island 300 km in diameter representing Iceland was located at the sill latitude and 350 km from the western boundary. The model was forced at the surface with a zonal wind stress τ = τ0 cos(π y /L), where L is the meridional extent of the basin, y is the meridional coordinate and τ0 = 0.15 N m−2 . The upper layer temperature was restored towards an atmospheric temperature that decreased from 10 ◦ C at y = 0 to 2 ◦ C in the northwest corner of the basin with a timescale of 60 days. The stratification south of y = 200 km was relaxed towards a uniform stratification of N2 =−g/ρ0∂ρ/∂z =2×10−6 s−2, where ρ is the density, ρ0 is a reference density and z is the vertical coordinate. The horizontal grid spacing was 5 km and there were 20 uniformly spaced levels in the vertical. The model was started from rest and run for a period of 30 years. Full details are provided in Spall (2011).

This paper is the latest in a series of modeling/theoretical studies Spall has been undertaking as a means of better understanding where the downward transport of the MOC takes place, and what determines its magnitude.  One result that has been a little surprising, and also supported by observations, is that the Lab Sea is not all that important for the MOC (Pickart and Spall 2007).  In general Mike employs configurations that are very idealized: He says he was pleasantly surprised to see something like the NIJ pop out of this configuration when he put “Iceland” in.  He added “MITgcm has been a very useful tool because of its z-coordinates and partial cell bottom topography”. To find our more about the modeling work involved in this and other of his studies, contact Mike.

A Selection of Publications by Mike Spall using MITgcm:

Spall, M.A. (2011)  On the role of eddies and surface forcing in the heat transport and overturning circulation in marginal seas. (in press:  J. Climate)

[link to all Mike’s pulications] 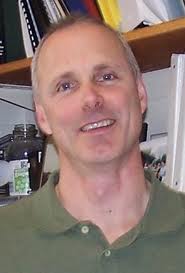 Mike has been using MITgcm for about 10 years. He likes fishing, boating, catching lobsters, and gardening.