At the intersection of physics and biology in the ocean 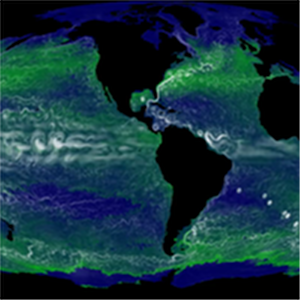 Various fields from an integration of the darwin model with 78 types of phytoplankton in MITgcm with ECCO2 physics: sea-surface temperature, subsurface-velocity, nitrate and chlorophyll-a – Image source: MIT, Darwin Project

Mick Follows is a Senior Research Scientist in the Program in Atmospheres, Oceans and Climate, part of the Department of Earth, Atmospheric and Planetary Sciences, at MIT. Together with the other members of the Marine Biogeochemical Modeling group (researchers Stephanie Dutkiewicz, and Oliver Jahn, postdocs Sergio Vallina, and Anne-Willem Omta, and graduate students Sophie Clayton, Chris Kempes, Emily Zakum and Keisuke Inomura) he is trying to understand the global carbon cycle and global plankton populations using a combination of simple models, data analysis and numerical simulations of the ocean.

A major focus of the group’s current work is The Darwin Project: An interdisciplinary, interdeparmental effort at MIT to model marine ecosystems and understand how they are regulated by, and feedback upon, the environment. The Darwin Project uses MITgcm,  and ECCO2 products extensively in its work.
In this video, which grew out of a Plenary Lecture at the Spring 2012, American Geophysical Union, Ocean Sciences meeting in Salt Lake City ,UT, “Modeling Marine Microbes:  From Molecules to Ecosystems”, Mick talks about the past, present and future of marine ecosystem modeling. In particular he explains how his group uses MITgcm to understand the organization of plankton populations and how advances in cell biology and microbiology might inform future models.

Acknowledgements: Thanks to the ECCO2 and Darwin Project teams for their contributions to this work. Particular thanks goes to Oliver Jahn for creating the animations used in this video.