Source and Pathway of the Western Arctic Upper Halocline 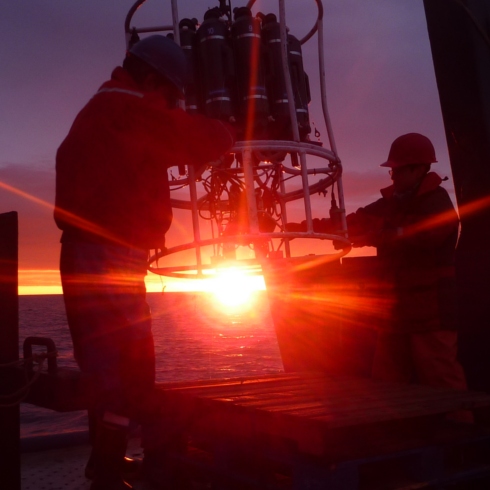 An working in the Chukchi Sea to the Arctic sunset/rise. Photo credit: Nikita Kusse-Tiuz of Arctic and Antarctic Research Institute in St. Petersburg.

In a recent paper in the Journal of Physical Oceanography, An Nguyen (MIT) and co-authors Ronald Kwok (JPL) and Dimitris Menemenlis (JPL) report on work using MITgcm to better understand the origin and character of  the western arctic upper halocline.

Temperatures in the Arctic region has been rising at approximately twice the global average rate in the past 100 years (Solomon et al., Technical Summary, IPCC 2007).  To understand the effect of warming on the Arctic sea ice and ocean circulation, An Nguyen and colleagues simulated a data-constrained coupled ocean and sea ice state estimate at high horizontal resolution.  One area of great interest is the Chukchi Sea where the source of an important water mass, the Western Arctic upper halocline, is formed.

The upper halocline, a layer of high vertical salinity gradient and near-freezing temperature, resides at depths 50-200m and insulates the surface sea ice from the heat stored in the Atlantic Water at depths below 300m.  Thus an understanding of its origin, ventilation, and variability can improve our understanding in the Arctic Ocean circulation and in the halocline’s contribution to sea ice changes.

Based on their two 1992-2008 data-constrained MITgcm solutions at 9- and 4-km horizontal resolution, Nguyen and co-authors found that dense water (a) forms on both the shallow Chukchi and Bering Seas during the winter as a result of sea ice formation and polynyas, (b) flows down Barrow and Central-Herald Canyons as intermittent currents from later winter to late summer, (c) ventilates the upper halocline in the Western Arctic interior at depth 50-150m.  They also concluded that mechanisms of dense water transport are advection by the main flow from the shallow shelves to the steep slopes, then by eddies from the shelf slope into the ocean interior.

In this video interview, An presents the results of the Nguyen et al, (2012) study, showcasing the teams MITgcm, Chukchi and Bering Seas modeling work.

MITgcm on Ice: A video interview with MITgcm modeler An Nguyen

An Nguyen got her undergraduate degree at UCLA in geophysics, coming to MIT for grad school where she worked with Professor Tom Herring. After graduating, she returned to JPL in Pasadena, to work with long-time MITgcm user Dimitris Menemenlis. She has been back at MIT since February 2011, working with Patrick Heimbach, and continuing to use MITgcm to study the Arctic Ocean and North Atlantic.