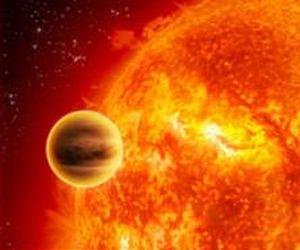 As the body of observations of extrasolar planets possessing a range of effective temperatures, mass, and orbital eccentricities has grown, so to has the desire to develop three-dimensional atmospheric models that self-consistently treat radiative transfer, dynamics, and basic chemical processes to correctly interpret such observations. This month we focus on research using MITgcm to model atmospheres on Jupiter-like exoplanets showcasing work by recent University of Arizona, Lunar and Planetary Laboratory graduate, Nikole Lewis.

Nikole is interested in the atmospheric structure and dynamics of the class of exoplanets termed hot Jupiters — giant planets at 0.1AU or less from their host star. She is particularly interested in how a planet’s atmospheric chemistry affects its large scale circulation patterns, global temperature distributions, and emergent planetary flux spectra.

The tool she uses is the three-dimensional Substellar and Planetary Atmospheric Radiation and Circulation (SPARC) model developed by advisor Adam Showman and Jonathen Fortney (Showman et al., 2009). Employing MITgcm for its atmospheric dynamics kernel, SPARC overlays a “non-gray” radiative transfer model to allow realistic determination of the amount of heating/ cooling at each grid point. By treating radiative and advective parameters in this self-consistent manner, SPARC avoids the need for advective tuning parameters often employed in one-dimensional models. Outgoing fluxes from the SPARC model atmosphere are used to calculate model visible and infrared spectra at any point in the planet’s orbit, which can then be used to estimate planetary emission as a function of orbital phase as well as transmission spectra if the planet transits its host star.

Zonal wind speeds (colorscale) for 50x solar metallicity case of the Neptune sized exoplanet GJ 436b. GJ 436b is on an 0.15 eccentricity orbit about an M-dwarf star. The movie shows the hemisphere of the planet that faces an earth observer as a function of time. The distance of the planet in the frame is representative of the changes in the planet-star distance as a function of time. Positive winds are eastward, while negative winds are westward. Notice the strong (1500 m/s) eastward jet that develops at the equator of this planet – From a simulation using SPARC/ MITgcm, courtesy of Nikole K. Lewis.

In recent work Nikole’s team has been focusing on the highly eccentric exoplanets HAT-P-2b (e=0.51) and HD 80606b (e=0.93). Theoretical phase curves from atmospheric models of HAT-P-2b are being compared with observations from the Spitzer Space Telescope at 3.6 and 4.5 microns while for HD 80606b, the team has been specifically looking at how the flash-heating event that occurs near periapse would affect the atmospheric dynamics of this planet. In addition they have also been investigating how assumptions about rotation rate might affect their theoretical phase curves of HD 80606b.

This fall Nikole, recent recipient of a NASA Sagan Fellowship, moves to MIT to join Sara Seager‘s Group where she will benefit from on-the-ground support from the MITgcm home development team as she implements updates to the SPARC model to improve computational efficiency, builds routines to solve for disequilibrium abundances of carbon bearing molecules, integrates opacity tables  to represent both carbon rich and carbon poor atmospheres in chemical equilibrium, and finally incorporates cloud physics routines to support the study of hazes and clouds in exoplanet atmospheres – which, just like on Earth, can so drastically alter atmospheric flux balances.

To find out more about Nikole’s research contact nklewis@mit.edu

Temperature (colorscale) from models of the highly eccentric (e=0.93)
exoplanet HD 80606b. This movie shows the hemisphere of the planet that
faces an earth observer as a function of time.  The distance of the planet
in the frame is representative of the changes in the planet-star distance
as a function of time. Notice the flash-heating that occurs as the planet
passes through the periapse of its orbit and the subsequent compressional
(shock) heating that appears on the night side of the planet – From a
simulation using SPARC/ MITgcm, courtesy of  Nikole K. Lewis

Temperature (colorscale) and winds (arrows) near the 120mbar level
for the highly eccentric (e=0.93) exoplanet HD 80606b. The true anomaly
(f) indicates the angular distance of the planet from
periapse (f=0). The solid vertical line represents the longitude of the
sub-stellar point while the dashed vertical line represents the sub-earth
longitude.   Notice the dramatic change in temperatures and wind patterns
as this planet is flash heated near the periapse of its orbit – From a
simulation using SPARC/ MITgcm, courtesy of Nikole K. Lewis.

Nikole Lewis has been using the MITgcm since 2008. When she’s not modeling other planets she says she spends most of her research time analyzing exoplanet observations from the Spitzer Space Telescope. These observations show phase variations in the planet’s brightness that are indicative of radiative, advective, and chemical processes in the planet’s atmosphere. When she’s not working she enjoys spending time with her husband and 2 year old daughter.