Forecasting the Weather on Pluto

Forecasting the Weather on Pluto 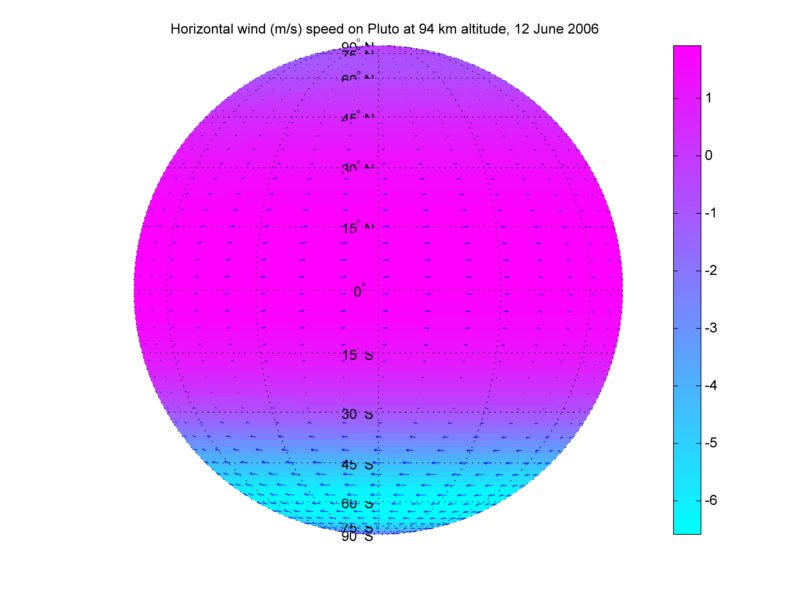 Angela Zalucha, a research scientist at the SETI Institute, has always been interested in weather: “When I was in college, I studied astronomy. I also worked at a radio station as an assistant in the weather office. One day a co-worker said to me, ‘someday you will be giving the weather forecast for Saturn!’ And I thought, ‘that’s not such a crazy idea!’ “. It turns out, other planets in our solar system (and also ones in other solar systems) have weather too, and sometimes that weather can get pretty wild. For example, Venus has an atmosphere that is 90 times thicker than Earth’s and a mean temperature of 860°F. Mars is so cold (-190 to -28°F), that its carbon dioxide atmosphere starts freezing out every winter. The giant planets (Jupiter, Saturn, Uranus, and Neptune) have high speed winds, fast swirling vortices, and atmospheres so thick that they make up most of the planet. Pluto’s atmosphere doubles in thickness as it gets closer to the Sun. Even Titan, a moon of Saturn, has an atmosphere very similar to Earth, except it is so cold that it rains methane instead of water.

Zalucha is currently the most interested in Pluto’s atmosphere: “Pluto has gotten a lot of press lately over the debate as to whether or not it’s a planet. But that’s not very important, compared with all the scientific questions we have about it.” Pluto is very far away (40 times farther from the Sun than Earth is) and very small (five and a half times smaller than Earth), so it is hard to observe it with a telescope. Also, no spacecraft has ever visited there. As Zalucha comments “Pluto’s atmosphere is a mystery because although we know a little bit about its temperature and the composition of its atmosphere, we don’t know anything about the wind.”

Since the first such observations in 1988, one of the primary sources of information about Pluto’s atmosphere has been stellar occultation light curves. Interpreting the information contained in these curves enables remote determination of the atmospheric global temperature, and density. Strobel et al. (1996) is one among several models that includes the heating and cooling effects associated with CH4 and CO, two gases abundant in Pluto’s atmosphere, and can be used to predict temperature and density under various assumptions. Using this (1D) model to calculate temperature as a function of height and the light curves they imply, Zalucha found that her model light curves were most sensitive to surface pressure and CH4 mixing ratio. You can read more about this work and how her light curves compared with 1988, 2002, 2006, and 2008, data and what the curves implied for the CH4 mixing ratio and surface pressure on Pluto in these years in Zalucha et al. (2011a) An Analysis of Pluto Occultation Light Curves Using an Atmospheric Radiative-conductive Model.

Refining this model by introducing a troposphere (through the addition of tropospheric height as a new parameter), Zalucha found the no-troposphere solutions to be in better agreement with the data (see Zalucha et al (2011b) An Investigation of Pluto’s Troposphere Using Stellar Occultation Light Curves and an Atmospheric Radiative-conductive-convective Mode.)

Many 1D studies have focused on the vertical temperature structure of the atmospheres of Pluto and Triton (Neptune’s largest moon and a body with similar characteristics to Pluto’s), but little is known about their wind and general circulation. Mainly this is due to the difficulty in the remote sensing of winds, and the fact that these worlds are difficult to reach by spacecraft (the only two being Voyager 2 that flew by Triton in 1989, and New Horizons which will fly by Pluto in 2015).  As a result, general circulation models are very important.  Although 1D models of temperature allow us to infer that CH4 produces a strong stratospheric inversion in Pluto’s atmosphere, strongly inhibiting vertical motions (e.g., Hadley cells), and causing Pluto (and probably Triton too) to have markedly different circulations than Earth and other Solar System Planets, it takes at least a 2D GCM to determine the wind.

Configuring MITgcm as a hydrostatic and compressible N2 atmosphere with CH4 volume mixing ratio that is constant with height, Zalucha uses the IAU pole convention – i.e. that Pluto rotates in the opposite sense as its revolution around the Sun and has an obliquity of 90 degrees. Full details are given in Zalucha and Gubbis (2012).details.

“Many meteorologists study only Earth’s atmosphere,” Zalucha notes, “but I am fascinated by the vastly different weather and climate conditions that occur on all planets. I believe that in order to fully understand the physics that governs our own atmosphere, we must study the atmospheres of all planets. It is analogous to the study of the human body–biologists don’t just study people to learn how our bodies work, the study all life forms. Studying a variety of atmospheres leads me to have a deep understanding of how fundamental processes change the atmospheric circulation and structure.” 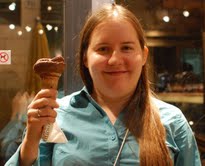 Angela has been using MITgcm since 2006. When she is not modeling the atmospheres of other planets she is a keen skier.

To find out more about this work contact Angela.