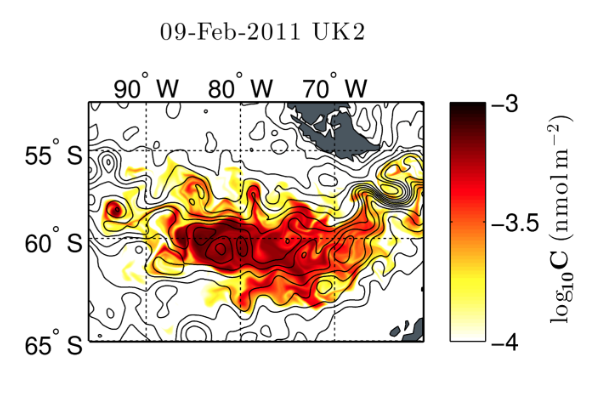 Visualization from an experiment using MITgcm – Image courtesy the researchers

British Antarctic Survey oceanographers Emma Boland, and longtime MITgcm user Emily Shuckburgh, together with co-authors, have been using the MITgcm to help understand the role of turbulent mixing in the Antarctic as part of the Diapycnal and Isopycnal Mixing Experiment in the Southern Ocean (DIMES.)

The Diapycnal and Isopycnal Mixing Experiment in the Southern Ocean (DIMES) was initiated in 2009, with an aim to quantify the role of small- and large-scale turbulent mixing in the Antarctic Circumpolar Current (ACC). The DIMES field program has focused on the part of the ACC that flows from the abyssal plain in the southeastern Pacific into the topographically rough Drake Passage region and beyond.

In Estimating a sub-mesoscale diffusivity using a roughness measure applied to a tracer release experiment in the Southern Ocean (to be released as part of JPO’s upcoming The Diapycnal and Isopycnal Mixing Experiment in the Southern Ocean (DIMES) Special Collection,  Emma Boland working with long-time MITgcm user Emily Shuckburgh at British Antarctic Survey and co-authors, have been using MITgcm to test the use of a measure to diagnose a sub-mesoscale isopycnal diffusivity by determining the best match between observations of a tracer and simulations with varying small-scale diffusivities.

Specifically, the team set out to investigate the robustness of a ‘roughness’ measure to discriminate between tracer fields experiencing different sub-mesoscale isopycnal diffusivities advected by scaled altimetric velocity fields. 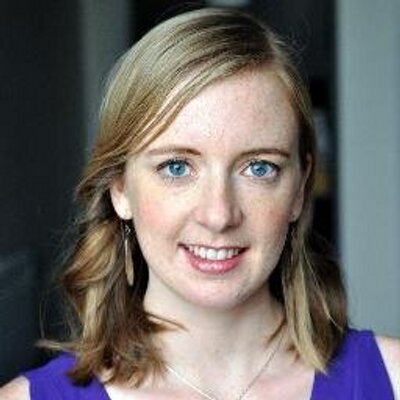 Emma Boland has been using MITgcm since 2010. When she’s not modelling the ocean, she enjoys knitting and running after her one-year old.

The team find that simulations with an isopycnal diffusivity of ~20 m2s−1 best match observations in the Pacific sector of the ACC, rising to ~20-50 m2s−1 through Drake Passage, representing sub-mesoscale processes and any mesoscale processes unresolved by the advecting altimetry fields. In addition, except where there are simply too few measurements overall, they demonstrate that the roughness measure is a statistically robust way to estimate a small-scale diffusivity when measurements are relatively sparse in space and time. They also consider how planning of tracer measurements during a cruise in order to maximise the robustness of the roughness measure might be important finding that the role of the roughness measure becomes more robust if the spatial resolution of tracer measurements is increased with the time since tracer release.

To find out more about this work contact Emma.

Tingting Yang and Yongsheng Xu (2015), Estimation of the time series of the meridional heat transport across 15°N in the Pacific Ocean from Argo and satellite data, Journal of Geophysical Research Oceans (early online view), doi: 10.1002/2015JC010752