The figure shows the six-year time mean wind stress field and topographic form stress field from SOSE, looking north from Antarctica. South America appears on the right, Australia in the middle, and the southern tip of Africa on the very top left; black lines show the mean Antarctic Circumpolar Current streamfunction. Red indicates eastward stress, wherein the wind or the solid earth pushes the fluid eastward. All of the wind stress at the surface pushes eastward, and some regions of topography push eastward as well. Most of the larger-scale topography is blue, though, indicating that these ridges and continents are pushing the fluid to the west, balancing the eastward wind stress. Click to expand. – Image courtesy: J. Masich

The Southern Ocean State Estimate (SOSE) is a 1/6 degree , eddy-permitting model of the Southern Ocean based on the MITgcm. In their new study Topographic Form Stress in the Southern Ocean State Estimate, researchers from Scripps Institution of Oceanography, graduate student Jessica Masich, PhD advisor Teresa Chereskin and long time MITgcm user Matthew Mazloff diagnose the momentum balance in a six year run of the state estimate to evaluate the role form stress across bottom topography might play in balancing the input of stress by wind at the surface.

The team ﬁnd that 95% of the zonal momentum input via wind stress at the surface is balanced by topographic form stress across ocean ridges, while the remaining 5% is balanced via bottom friction and momentum ﬂux divergences at the northern and southern boundaries of the analysis domain.

Although Masich et al find the time-mean zonal wind stress ﬁeld exhibits a relatively uniform spatial distribution, they note the time-mean topographic form stress is concentrated at shallow ridges and across the continents that lie within the Antarctic Circumpolar Current (ACC) latitudes; nearly 40% of topographic form stress occurs across South America, while the remaining 60% occurs across the major submerged ridges that underlie the ACC.

To find out more about this work contact Jessica. 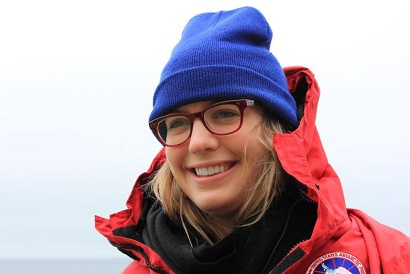 Jessica Masich has been using MITgcm via SOSE throughout her PhD research, comparing SOSE results to observations from the cDrake Experiment in the Drake Passage. When she is not hard at work MITgcming she spends much of her free time swimming in the pool and — when it’s warm enough — with the seals and (friendly!) Leopard sharks in La Jolla Cove.

Look out for her at Ocean Sciences where she will give a poster (PC14D-2091, “Momentum balance in the Southern Ocean”) on Monday, Feb 22, from 4pm to 6pm. The poster will push the work described in Masich et al. forward by including the teams initial exploration of mechanisms of vertical momentum transfer in SOSE and in the cDrake Experiment observations, from surface source to seafloor sink!

Himansu K. Pradhan, A. D. Rao & Madhu Joshi (2015), Neap—spring variability of internal waves over the shelf-slope along western Bay of Bengal associated with local stratification, Natural Hazards, Journal of the International Society for the Prevention and Mitigation of Natural Hazards, doi: 10.1007/s11069-015-2027-9