Cloudy with a Chance of Aliens 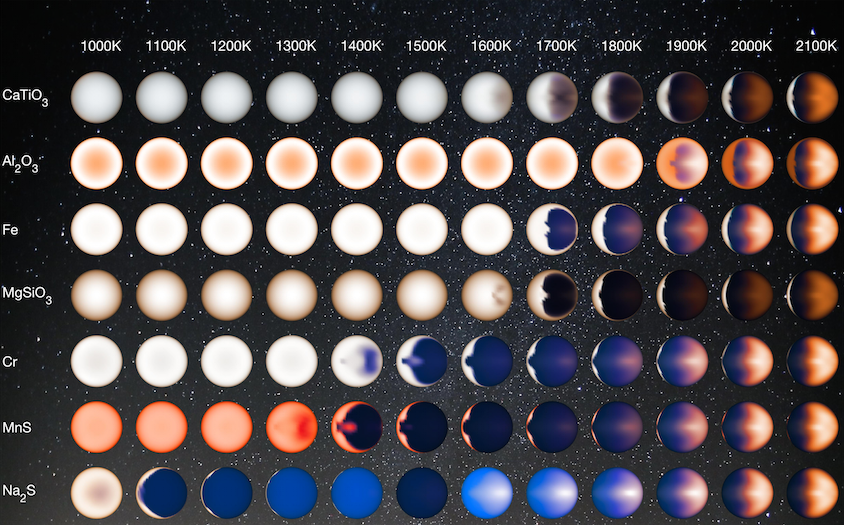 What a human eye would see if he were looking at one of theses planets. The colors are a combination of cloud reflection, gaseous rayleigh scattering, absorption by sodium gas and thermal emission of the planet – image credit: V. Parmentier

Hot Jupiters are gas giant planets orbiting very close to their star. They are tidally locked, with a permanent dayside and a permanent nightside. In recently published work in the Astrophysical Journal, Vivien Parmentier, a NASA Sagan postdoctoral fellow in the Lunar and Planetary Laboratory at the University of Arizona, in collaboration with long time MITgcm planetary atmosphere modelers Adam Showman, Jonathan Fortney and others, has been using the MITgcm to study the likely distribution of clouds on these planets.

Clouds result from the condensation of chemicals with different chemical species condensing at different temperatures. The cooler parts of the planet, such as the nightside is predisposed to have more clouds. For a given cloud type, cooler planets should be entirely covered by clouds. For more strongly irradiated planets, the dayside becomes too hot for clouds to form, leading to a clear dayside. In between, partially cloudy daysides are expected.

Authors best guess of how cloud composition varies with the temperature of the planet – Image credit: V. Parmentier

Using the thermal structure calculated using the MITgcm, Parmentier was able to determine at which longitude clouds are more likely to form. The asymmetric thermal structure (mainly an eastward shift of the hottest point of the planet) that originates from the model, and which is backed up by much observational evidence, leads to an inhomogeneous cloud structure. Given a calculated temperature map, different cloud species produce a different cloud distribution because they have different condensation temperatures.

Vivien Parmentier is a Postdoctoral Sagan Fellow at the Lunar & Planetary Laboratory, University of Arizona, in Tucson. He moved to Arizona from Santa-Cruz in 2015. He has been using the MITgcm for the past 5 years looking at hot Jupiters. He says when he is not modeling exoplanets he likes biking around the world but that for the past couple of years he has been on “another kind of adventure: Taking care of his two <3 years old daughters.”

The Kepler spacecraft can observe the reflected light from hot Jupiter atmospheres, leading to constraints on the longitudinal variations of the cloud coverage. By comparing MITgcm models with Kepler data, Parmentier was able to determine the more likely composition for the cloud coverage. Among his results he showed that not all planets posses the same clouds. Silicate clouds (MgSiO3) can form in high temperature planets but must disappear in cooler planets, where Manganese sulfide clouds (MnS) are more likely to form. A very similar cloud transition has been seen in brown dwarfs atmospheres.

To find out more about this work contact Vivien

Parmentier’s first publication using the MITgcm was the 2013 paper in Astronomy and Astrophysics 3D mixing in hot Jupiters atmospheres. I. Application to the day/night cold trap in HD 209458b. In it he included tracers in a hot Jupiter model to determine how the large-scale circulation can mix up the clouds. The surprising result was that despite being radiative (and not convective), hot Jupiter atmospheres are very well mixed and cloud particles can easily be lifted to high altitudes.