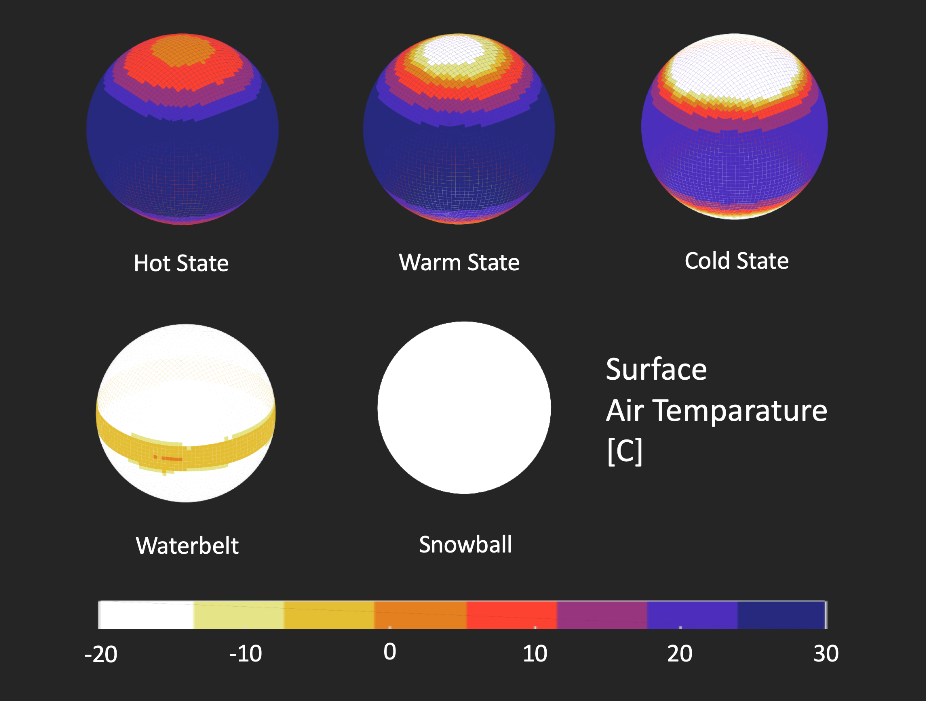 Reporting by Helen Hill for MITgcm

Maura Brunetti is a Research Scientist working in Jérome Kasparian’s Nonlinearity and Climate Group at the Institute of Environmental Sciences, University of Geneva (UNIGE), Switzerland. Her interests lie at the intersection of fluid dynamics, climate, and mathematical and theoretical physics. We previously featured her work using MITgcm to explore the ocean circulation associated with the global land distribution during the Jurassic in 2015. Recently she has been using MITgcm to explore climate sensitivity. 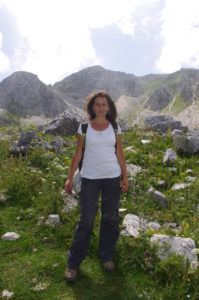 Maura Brunetti began using MITgcm in 2012. Besides modeling Earth’s climate she loves to hike in Italian and Swiss mountains.

“Earth’s climate is an out-of-equilibrium system that, under the effect of an inhomogeneous distribution of solar radiation at its boundary, evolves towards statistically stationary states,” Maura Brunetti explains. “Even neglecting possible additional non-steady forcing (for example of anthropic origin), nonlinear interactions between the main components of the climate system, i.e. atmosphere, ocean, cryosphere, and biosphere, make its study highly difficult.”

To address the complexity of the climate Brunetti tells me, modelers have historically developed a hierarchy of models with increasing levels of comprehensiveness, ranging from energy balance models to the most realistic general circulation models. In their study, recently published in Climate Dynamics, she and co-authors Kasparian and Christian Vérard (also from UNIGE and co-author on her 2015 Jurassic paper) apply MITgcm to the numerical study of a coupled aquaplanet (after Marshall et al. 2007), a system where, as she describes it “the full coupling between atmosphere, ocean, and sea ice is taken into account, but where motion is simplified by the absence of land, the planet being entirely covered by the ocean. In this way, even as the complexity of the system is reduced with respect to the real climate system, the main nonlinear interactions between its components are still taken into account.”

Brunetti explains, “Under the action of a constant external forcing and at fixed values of internal parameters, the solutions of a dynamical system are attracted toward stable regions of phase space called attractors. Finding a system’s attractors and the basins of attraction they lie in is the first step in the analysis of the unperturbed dynamics.”

At the basin boundaries, the dynamics are highly nonlinear, small perturbations giving rise to abrupt and potentially irreversible changes that correspond to passage from one attractor to another, so-called “tipping points”. Examples of tipping elements in the present-day climate are the shut-down of the overturning circulation in the Atlantic Ocean, methane release from the melting of the permafrost or dieback of the Amazon rainforest. Characterizing an attractor helps in predicting the system response to perturbations and Brunetti says a huge effort is presently underway to understand properties of attractors and tipping points, to develop early warning systems for detecting the approach to such thresholds, and to clarify the nature of perturbations (internal variability and self-reinforcing feedbacks) or external forcing (for example of astronomical or anthropic origin) that could give rise to critical transitions.

In their work, the team systematically searched for attractors in an aquaplanet, the simplest configuration in a coupled atmosphere-ocean-sea ice model. By comparing the more accurate model set-up where dissipated kinetic energy is re-injected within the system as thermal energy, and the bulk cloud albedo varies with latitude, with one where dissipated kinetic energy is lost and bulk cloud albedo is held constant, Brunetti et al’s experiments were able to show how the large scale structure of the unperturbed system changes as the physics model is made more realistic.

While previous studies had identified up to four co-existing attractors, the investigators found up to five attractors that co-exist under the same external forcing represented in their simulations by fixed values of solar irradiation and atmospheric CO2 content. “This demonstrated to us that a simplified system such as a coupled aquaplanet is sufficiently rich to produce a complex dynamical structure,” Brunetti says. “Each attractor is associated with a different climate, ranging from snowball conditions to a hot state where the sea ice completely disappears.”

“We characterized each climate by describing ocean overturning circulation, heat transport, cloud cover, and surface air temperature distribution, and by estimating a list of averaged global quantities and energy budget components to reveal the dominant nonlinear feedbacks at play in each attractor,” continues Brunetti. “Taking advantage of several powerful tools borrowed from the theory of dynamical systems and statistics, such as instantaneous dimension and persistence, and principal component analysis, we were able to explore the dynamics of the attractors to differentiate them further.”

Brunetti says the team used MITgcm version c65q with a low-resolution cubed sphere grid where each face of the cube has 32 × 32 cells (CS32), giving a horizontal resolution of 2.8 degrees. Their ocean grid had 15 vertical levels with different thicknesses, from 50 m near the surface to 690 m in the abyss, for a total depth of h = 3 km. In this way, simulations over thousands of years could be run in a reasonable amount of CPU time (~100 years of simulation per day of computation on a typical workstation).

To find out more about this work contact Maura